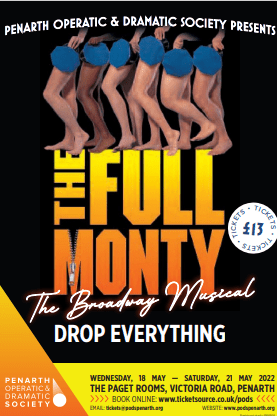 Cast your mind back to 1997, and you will, no doubt, remember the hit movies THE FULL MONTY. Our Musical follows much the same storyline as the original film.

In a small town in Buffalo, USA, the local steel mill has closed down, leaving many of the town’s men unemployed.

Desperate to keep up with his child support payments, and with no job, Jerry is nearing despair. Seeing the reaction of the town’s women to a visiting strip artist, Jerry persuades 5 men to join him in a new strip act, called Hot Metal; Dave is Jerry’s reluctant best friend. He’s overweight, he’s lost his libido and really doesn’t want to be a stripper; Malcolm has no friends and still lives with his mother; Harold hasn’t told his wife Vicki that he’s been out of work for 6 months; Horse has arthritis and a shrinking manhood; and Ethan has an eye for men rather than women.

These unlikely men embark on a journey of self discovery, and make a promise that, unlike the strippers before them, they will give the local ladies exactly what they have waited for….they will go THE FULL MONTY!

Start:
May 18
End:
May 21
https://www.ticketsource.co.uk/pods/the-full-monty/e-qjgqxk