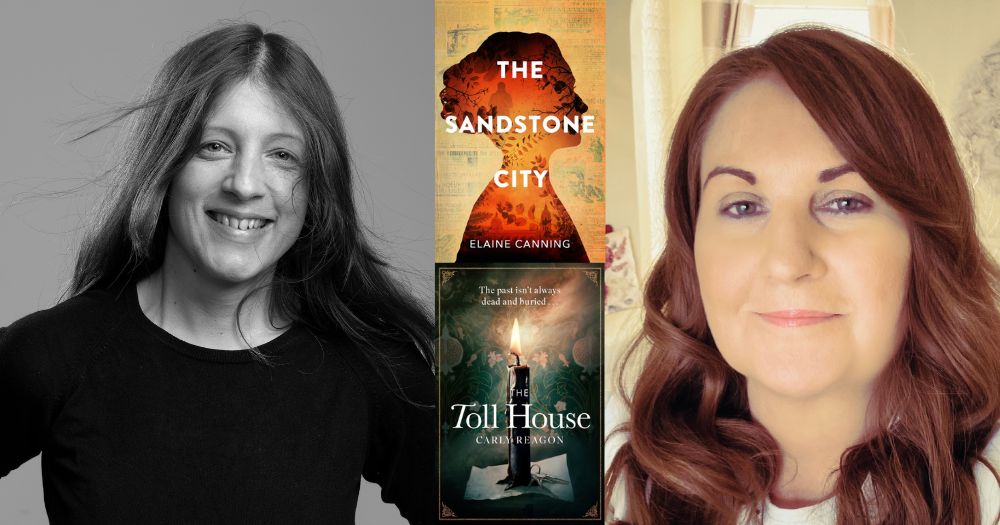 Head down to Penarth Pier for a spook-tacular evening of ghost stories in the company of authors Carly Reagon and Elaine Canning.

Carly’s debut novel The Toll House and Elaine’s novel The Sandstone City, also her debut, are both published this autumn. They will be interviewed in this special pre-Halloween event by writer, editor and now publisher, Rebecca F. John.

***
Carly Reagon completed a six-month course at Curtis Brown Creative and was shortlisted for the Lucy Cavendish College Fiction Prize in 2019. Her writing is inspired by her love of the Welsh countryside where she lives with her husband and three children. She works as a senior lecturer at Cardiff University, is a keen runner and singer, and has an interest in anything historic.

Incredibly propulsive and a genuinely frightening read, The Toll House draws on aspects of the classic ghost story form whilst being a wholly original thriller that reflects themes relevant to contemporary society; including domestic violence and the threat to women from men who seek to possess them. This superbly chilling debut novel is the perfect Halloween book: a terrifying, unique ghost story for fans of The Haunting of Hill House and author Susan Hill.

***
Originally from Belfast, Elaine Canning is a public engagement specialist and writer living in Swansea. She holds an MA and PhD in Hispanic Studies from Queen’s University, Belfast and an MA in Creative Writing from Swansea University. She is currently Head of Special Projects at Swansea University, which include the Rhys Davies National Short Story Competition, as well as Executive Officer of the Dylan Thomas Prize.

The Sandstone City is a novel that questions what happens when we lose ourselves, when we lose those we love and which fragments of the self are worth holding onto. It is a story about the choices we make, the choices denied us and how we navigate what’s left. Set in Belfast in the early 00s, it is an experimental but accessible work of literary fiction, for readers who love Max Porter, Isabel Allende, David Mitchell, and Carlos Ruiz Zafon.

***
Rebecca F. John was born and grew up in Pwll, a small village on the south Wales coast. Her short stories have been broadcast on BBC Radio 4 and BBC Radio 4Extra, and in 2015, her short story ‘The Glove Maker’s Numbers’ was shortlisted for the Sunday Times EFG Short Story Award. She is the winner of the PEN International New Voices Award 2015 and in 2017 was named on Hay Festival’s ‘The Hay 30’ list. Her debut novel, The Haunting of Henry Twist (published in 2017), was shortlisted for the Costa First Novel Award. This year she will publish her first children’s book, a middle-grade novel called The Shadow Order, with Firefly Press, as well as two adult novels, The Empty Greatcoat (Aderyn Press) and Fannie (Honno Press).

Rebecca has also recently founded Aderyn Press, an independent publishing house based proudly in Wales. It publishes spooky, speculative, and historical fiction. Her first two titles, which includes Elaine Canning’s The Sandstone City, are to be published this year.