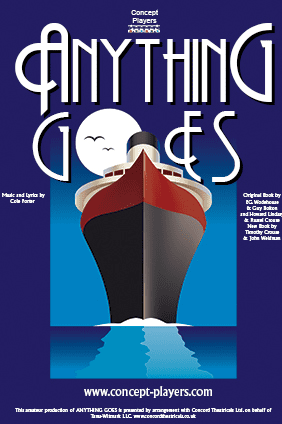 This spring Concept Players would like to invite you on a fun filled musical voyage with Cole Porter’s timeless Anything Goes.

This colourful musical comedy is set upon a transatlantic liner heading from New York to England with a motley bunch of passengers and crew. Billy, a young New York stockbroker, is madly in love with the beautiful heiress Hope Harcourt. Whilst saying goodbye to his boss, the blustery Elisha J Whitney, Billy spies Hope embarking and immediately decides to stow away and win her heart. Hope, however, is due to marry the English aristocrat, the somewhat Woosterish figure, Sir Evelyn Oakleigh (after all, some of the story was written by P.G Wodehouse). Also on board are the sultry nightclub singer evangelist Reno Sweeney who brings a lot of sass to the show and Moonface Martin, a rather unsuccessful gangster (Public Enemy No.13) on the run with his moll.

Surround these characters with riotous comedy, mistaken identities, love forsaken (and regained) and you are guaranteed a great night. And how could we forget the songs? Add in such classics as You’re The Top, Blow Gabriel Blow, I Get A Kick Out Of You and, the show stopper itself, Anything Goes, and you have an exciting, toe-tapping night of theatre.